I’m two weeks into my intern year and I must say, I could not have asked for a smoother transition into this new era of my life.

I’m sure that I would be in the running of the “Best Start To Intern Year” Award, if such an award existed. I say that because while many new interns across the nation started in the hospital wards on their first day of work, I found myself paired up with one of my co-interns out in the middle of nowhere at a summer camp for kids with chronic illnesses called Camp Carefree. In addition, once I finished that week of summer camp up, I proceeded to spend the first half of this past week shadowing various Peds Cardiology attendings in order to get a clearer idea of what their jobs consist of on a day-to-day basis. Then I had a morning of continuity clinic that ended up being more of an orientation session that got me acclimated to the clinic environment that I will be spending the next three years working in. And then was the 4th of July, followed by a night shift in the wards that started on Friday night and ended Saturday morning. I’ve had the rest of the weekend off and will be seeing my first panel of patients tomorrow morning at my continuity clinic before going on vacation for a week.

You see what I mean when I say I deserve the “Best Start To Intern Year” Award?

Of course I know that I’ve had an unusual start and that life is going to get a lot harder sooner or later, which is why I have not been taking this smooth start for granted. While I’ve been doing all I can to enjoy the free time I still have, I’ve also been making the most of it by taking the time to review a lot of the helpful transition information that we’ve been given over the past few weeks in order to set myself up for success for when I finally hit the wards full-time. I’ve also been working to familiarize myself to the Triangle area and have been busy establishing care with new healthcare and dental providers. While it would have been nice to have had this chill month later on in the year when I really needed it, I can’t be mad at the fact that I’ve been afforded the opportunity to ease into residency and to get myself adequately adjusted in a new area. I just gotta make the most of what I got! 😁

Now I mentioned earlier that I spent my first week of residency at a summer camp and you are probably wondering what that was all about and how the heck I was able to finesse that. Well, allow me to explain.

I was able to snag a week-long experience at the camp simply because I had expressed interest in camp medicine when I was asked about it in a scheduling survey sent to my intern class from our chief residents months back. Honestly, I had completely forgotten that I had checked the “interested in a camp experience” box, so when I saw my schedule for the first time last month, I was pleasantly surprised to see that I would be spending my first week of residency at summer camp. I was again pleasantly surprised when I learned that I would be there with one of my co-interns, whom I got to know very well during our week-long experience. So there’s that story. Yeah I know, it’s not that exciting of a story. But now you know how it happened and that’s what matters. 😊

My actual experience at Camp Carefree was a very positive one overall. We were there for “Neuro” week, where kids with all types of neurological conditions and developmental delays came to camp to have a great time. There were about forty kids in all, most of whom had a variety of medications to take, which meant that my co-intern and I had a variety of medications that we had to distribute multiple times a day. Outside of distributing and managing medications for the kids, our roles consisted of keeping the “Med Shed” (camp clinic) open, managing any acute medical concerns and/or problems that either the counselors or the kids came in with, coordinating plans with the camp directors, and being friendly and fun doctors that everyone could come talk to and hang out with. 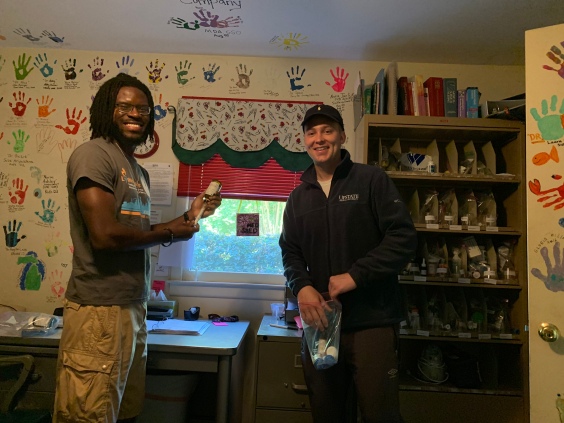 We were initially the only doctors present at the camp (which completely caught us off-guard), but soon enough we were joined by some child neurology fellows and a nurse practitioner as they rotated through the camp throughout the week. Thankfully, there weren’t any serious medical emergencies that we had to take care of during the week, although we did successfully treat quite a few injuries, headaches and stomachaches. We were also afforded quite a bit of down time, which we spent by getting to know each other, exploring the campgrounds, hanging out with the counselors and kids, and getting whatever work we could get done on our spotty Wi-Fi network. All in all, it was an awesome week full of great memories that I’ll be sure to forever cherish! 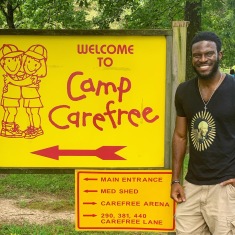 After my camp experience, I spent a couple days with various Peds Cardiology attendings, where I learned more about what life was like as a specialist in this field. I was scheduled to spend some time in the cath lab but because there weren’t any procedures occurring the morning I was there, I mainly spent my time talking with the two interventional cardiologists and learning more about the various heart procedures that pediatric patients can undergo.

As we were talking about their careers, one of them gave me some solid career advice, which was to refrain from letting the attitude of one person color my perception of a sub-specialty. That’s something I’ll definitely take with me as I continue to spend my intern year figuring out what I want my career to look like. While I’m on the subject of receiving advice, I got another piece of useful advice that same day from one of the upper-level residents in my program about choosing a sub-specialty. She advised me to ask specialists about the most frustrating things they deal with in their sub-specialty and to assess if those are things I would be comfortable dealing with if I were to decide on pursuing that sub-specialty. I hadn’t heard that before, so I definitely made a mental note of that. Plus it sounded like some really practical advice. It reminded me of yet another piece of advice I received at some point during medical school, which was to identify the “bread-and-butter” aspects (the common basics) of a specialty and to consider if I would be comfortable doing those things on a daily basis throughout my career. I’ll be sure to keep all three of these pieces of advice in mind, and to those of you out there trying to decide what to do with your life, I recommend you take these pieces of advice to heart too. They may very well help lead you into the career that you are destined to succeed in!

I spent the other Cardiology day with a cardiac electrophysiologist and ended up rounding on various patients in the PICU and on the main hospital floors with him, as well as reviewing EKGs and learning a decent amount of information that he was happy to teach me. In regards to my continuity clinic morning session, I already mentioned that it was essentially an orientation session. One of my co-interns and I participated in a couple of scavenger hunts designed to get us acclimated to the clinic, reviewed how to run a well child visit, interacted with the staff that we would be working with for the next few years, navigated through our EMR (electronic medical record) software and customized it to our respective likings. As for July 4th, it was a chill day where myself, my significant other, and some friends hung out in Durham to watch a baseball game and to catch the fireworks at the Durham Bulls stadium.

Last thing to touch on is my first night shift experience as an intern. Yeah, I randomly had a night shift scheduled during my elective month and I don’t have another one scheduled until like two weeks from now, where I’ll be on a two-week stretch of nights. I’m happy to report that my first night shift went pretty well overall, even though it has literally been months since I last worked in the wards. 😅 I definitely got bombarded with pages early on into my shift and I felt like I wasn’t catching much of a break at all, but my senior resident and the two medical students on service with us would always come in clutch when I needed them. I’m definitely thankful that they were around because I sure wasn’t as confident in my decisions as I would have liked to have been during that shift, especially early on in the night. It didn’t help that I wasn’t really familiar with any of the patients, though I eventually became somewhat knowledgeable of their respective stories as the night wore on, mainly because I was paged so much and had to educate myself about them before answering the questions that the nurses had for me.

After the pages slowed down midway through the night, I was able to finally, and somewhat comfortably, collect my thoughts and organize myself. That’s when I started developing a structured system of keeping track of my patients (yeah I know I was six hours late, don’t judge me), reading more about them via their patient charts, and talking more with my night team. The rest of the night went relatively smoothly and I found myself in situations where I really felt like a doctor, such as when the medical students and I would go talk to appreciative parents to comfort them and to remind them about the treatment plans that their children were going through. Introducing myself as “Dr. Wekon-Kemeni” felt somewhat foreign and unnatural to me, but I had better get used to saying it because that’s who my patients and their parents will see me as! I also have a STACK OF DEBT that serves as a cruel reminder of what I paid to earn this title. So there’s that. It’s going to take some time to shift my mindset from “medical student” to “resident”, but I know I’ll eventually get there. I’m so looking forward to the day where I realize that I’ve finally made that switch! And when I do, y’all better watch out! 😉

That’s all I have for you today! This whole two-week posting thing seems to be working pretty well so far, so I think I’ll keep this up for now. It lowkey feels weird not posting an update every week, but not doing so has also freed up some time that I can now spend doing other things. Plus, I have a feeling that I’ll be happy I decided to do this once my workload substantially picks up. 😅

I hope that you all have a phenomenal week!

“The first step towards getting somewhere is to decide you’re not going to stay where you are.” – John Pierpont “J.P.” Morgan

P.S. – Shoutout to the U.S. Women’s National Team for crushing the competition and winning the 2019 FIFA Women’s World Cup today!!! It has been so dope to watch them play these past few weeks; their love and passion for the game truly shined throughout the tournament!

P.P.S. – And shoutout to Coco Gauff on her insane comeback and win yesterday at Wimbledon!!!