First off, I want to express my deepest gratitude to President Obama, Vice-President Joe Biden, both of their families, and the Obama administration as a whole for doing what they could to make this country a better place. I distinctly remember watching the Obamas on CNN as they graced the stage in Chicago on Election Night back when I was a 15 year-old high school sophomore. I also remember not having to go to school during his first inauguration due to snowfall (it was like a 1/2 inch of snow lol). I remember watching his inauguration in awe and beginning to wonder what all of this meant for the country. That’s when I really began to both watch the news and pay attention to how politics were played out in this country. Having a leader such as President Obama in the Oval Office during such a critical period of my growth has been a blessing and an honor. He has inspired me to learn so much about so many things and has been a powerful symbol of hope, love and equanimity. Getting the chance to see him speak during my sophomore year of college was a highlight of my college career!

I actually videotaped most of his speech…I have no idea why. It really sucks to have had to see him and his administration go, but it feels good knowing that he will continue to interact with us as a fellow private citizen. It’s also dope that he and Michelle created Obama.org! Best believe I will be a frequent visitor of that site; I already got it bookmarked and everything!

Now that I’ve had the fortune to mature during Obama’s presidency, I’m ready to fully resist anything that threatens the progress his administration made in this world. This so happens to include almost all of Trump’s agenda and the agendas of the many Republicans that support him. It was so amazing to see all the Women’s Marches happening across the world yesterday…it just shows how insane the predicament we’re in is and how many people are willing to fight against hatred and inequality. Shoutout to all of you who took the time to participate in the marches! I admire each of you!

If you plan on resisting the current government but aren’t really sure what to do, the easiest thing to do (other than signing petitions) is to either write emails to your Senators or Representatives or to call them! Calling is more effective though and it only takes a couple minutes to do so, if that! You can click this link to find the contact info of your senator. Or you could just dial (202) 225-3121 (U.S. House switchboard operator) and ask to be connected to your state representative! I personally plan on calling the NC senators everyday in order to help fight against the craziness we’re up against. One person calling may not do much, but if many people are coordinated to call on a constant basis like Michael Moore is suggesting us to do, then I believe that we can make some sort of impact. If that means annoying them to death and jamming up their call lines, so be it. And you don’t need to have a speech rehearsed or anything, just tell them how you really feel! We’re currently on an uphill struggle, and it’s definitely not going to be an easy battle…but just like others in the past have, WE WILL PERSEVERE.

Okay I could go on and on about that, but I need to finish up this post and get back to studying because I’m still a med student lol. We started the Musculoskeletal/Rheumatology block this past week and it has been pretty straightforward so far. There’s a lot of little facts associated with the different rheumatologic conditions, which have been annoying to memorize, but I’m positive that I’ll be able to efficiently categorize the diseases and get them all down before our exam next Monday. But didn’t I just take a Renal pathology exam a little over a week ago? Yes, yes I did. These tests have been coming in like rapid fire yo. This ain’t no joke. I did do pretty well on that Renal exam tho! After this block will be the Endocrine/Reproductive block, and…..that’s it. Then I’ll be studying for the Step exam. Boy am I ready to get that exam over with.

On a final note, I’ve recently gotten involved with a minority male mentoring program that one of my friends founded, called S.Y.S.T.E.M. (Supporting Young Scholars Through Empowerment and Mentoring). The overall goal of the program is to provide support and guidance to young men by building meaningful mentor/mentee relationships. We plan on supporting the growth and development of our mentees by strategically partnering with schools, engaging in group-based mentoring & one-on-one meetings, and providing models of success that focus on emotional/behavioral management, professionalism, personal, and academic growth. We started working on the new program a few months ago, and this past Friday we all finally got to meet our mentees, who are all in 4-5th grade. Our main topic of that meeting was managing stress and emotions, so we spent about an hour discussing their thoughts on that and how us as students in the medical field each manage our own stressors and emotions in our everyday lives. It was a great event overall and the kids were actually really excited to interact with us! I’ll be looking forward to the rest of the meetings that we have with them over the course of the semester! 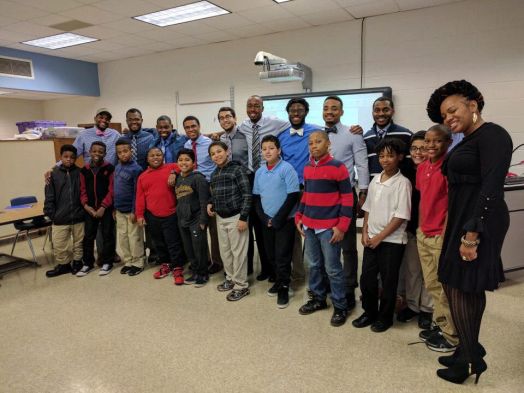 That’s all I have for today. Do your best to stay full of perseverance and empowerment this week!

“When obstacles arise, you change your direction to reach your goal; you do not change your decision to get there.” – Zig Ziglar